The Desert Mountain area consists of four major communities: Desert Mountain, Carefree Ranch, Ranch Homesteads, and Tonto Hills. The entire area consists of upscale housing in which some residents have serious concerns regarding flooding, erosion, and sedimentation problems. The study area is partially within the City of Scottsdale and partially within unincorporated Maricopa County. There is an extensive network of small washes and an intricate network of culverts to route flow through the communities. There are also four major washes.

WEST is performing an analysis of stormwater drainage and is evaluating the potential for sediment deposition and scour to support decision-making in regards to future mitigation and alternatives analysis. Data documenting flooding, erosion, or debris and sediment flow from property owners, municipalities and other stakeholders were collected. WEST also inventoried available as-built data for the nearly 800 culverts within the study area, determining which culverts would be represented in the two-dimensional combined hydrologic and hydraulic model of the study area. The model will be calibrated by adjusting surface roughness and infiltration parameters. WEST is now creating the final models and will be issuing a final report. 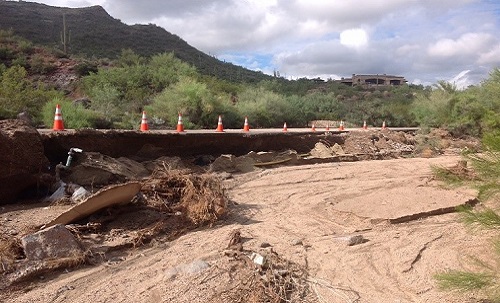